Botanical Traditions and Innovations in Bulgaria 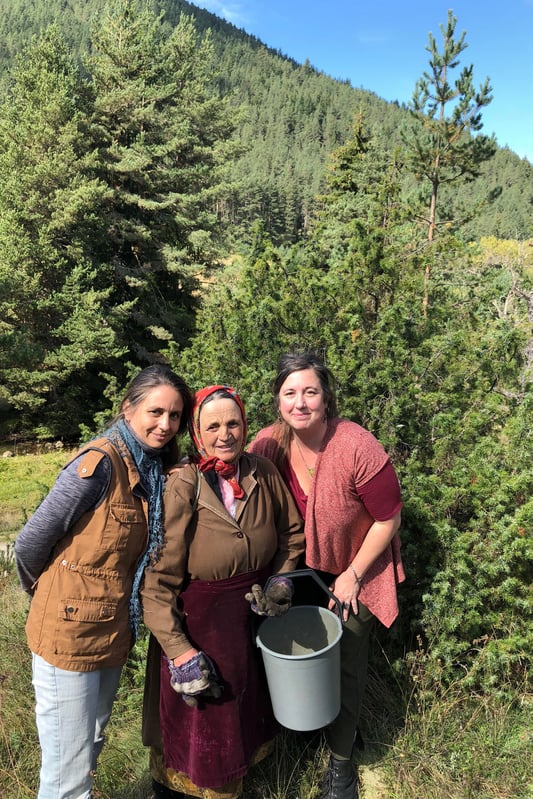 United Plant Savers' Susan Leopold and Mountain Rose Herbs' Jennifer Gerrity travel into the Balkan mountains at the peak of the autumn harvest to visit our organic farm and harvest partners in the Bulgarian countryside.

Amidst the stunning foliage of a golden autumn, I journeyed into the lush valleys and mountains of Bulgaria to seek out the wild plant collection sites where our regional partners harvest an array of our botanicals. Accompanying me on this trip was my esteemed colleague, ethnobotanist Dr. Susan Leopold, Executive Director of United Plant Savers. We wanted to gain a deeper understanding of the horticulture of Bulgaria, meet the people who harvest these plants, observe their traditional methods firsthand, and learn about the culture surrounding plants in the Balkans.

When it comes to biodiversity, Bulgaria is one of the richest countries in Europe. It ranks third in the EU in the percentage of national territory that is included in the European ecological network Natura, a 28-nation nature preserve system founded to “ensure the long-term survival of Europe's most valuable and threatened species and habitats.” The country has extensive laws governing the wild collection of indigenous plants regulated by the Medicinal Plant Act of 2000 and the Biodiversity Act of 2002, making Bulgaria a role model for the rest of Europe and possibly the world. It has a unique and strictly enforced system for ensuring the survival of its habitats, biodiversity, and endangered species. 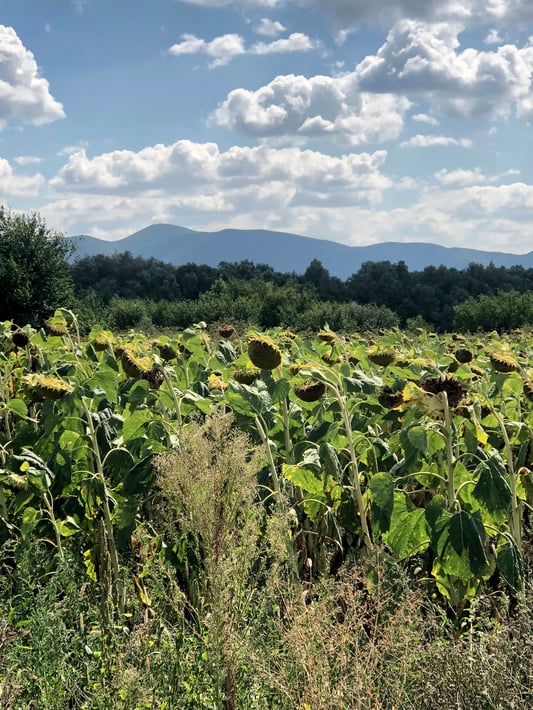 Organic sunflower seed production for oils is one of Bulgaria's largest exports. The nation's strict regulations concerning environmental conservation and agriculture help maintain the clean air, water, and soil that support some of the lushest biodiversity in Eastern Europe.

Bulgaria’s Ministry of the Environment and Water enforces these laws by annually auditing all companies who employ wild collectors or participate in the distribution of plant material domestically or for export. The country also has a list of non-pick plants (forbidden for commercial collection) and enforces collection limits for specially listed plants such as valerian, gentian, and elecampane. All wild collection of plant material in any season for commercial purposes undergoes a permit process that is audited in detail as part of an annual review.

We visited a consolidation site centrally located in the famous “Valley of the Roses,” where wild Rosa damascena bushes grow alongside cultivars for as far as the eye can see. This facility is not only a distillery specially designed for creating rose absolute, but also a place where wild harvesters and farmers come with their bounty to have it weighed in and purchased. The consolidator showed us the extensive record keeping that goes into such an operation. When bringing in a harvest, each collector must submit proof of permits and documentation comparing the weight of harvest as measured at the time of collection in comparison with sales invoices (to help monitor and manage overall harvest rates in a given season or area). The facility’s walls were filled with educational posters from conservation organizations committed to promoting sustainable harvest practices in Bulgaria, each written in the local language and illustrated with easy-to-understand visual guides to proper collection practices. The instructive graphics allowed Susan and I to identify many of the wildharvesting best practices we work to promote back in the US—practicing careful plant identification before collecting, leaving plant roots in the ground when taking aerial portions, harvesting only in the proper season and when the species is an abundant population, and so forth. 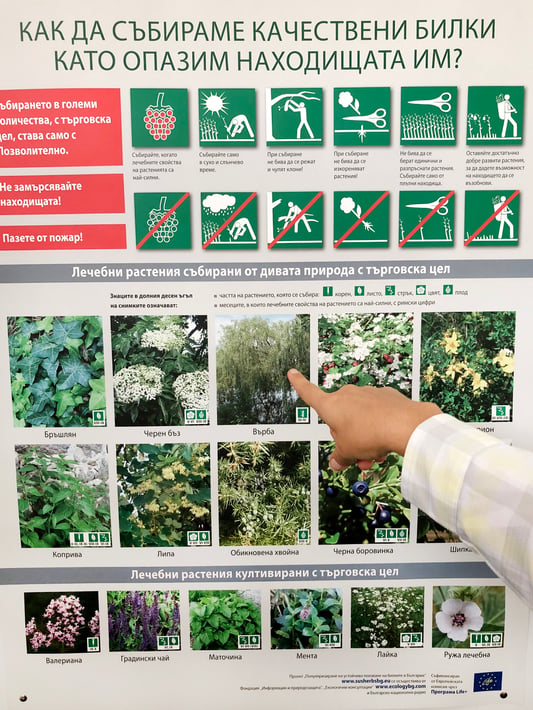 Educational posters depict proper wild collection practices as well as protected plants that must be left alone. Bulgaria strictly enforces its regulations governing the practice of wildharvesting, and field workers must be well trained in these rules to practice their craft for commercial purposes.

While wildcrafting has held a prominent place in this region’s traditions for centuries, participation in the trade has slowly but steadily fallen off in recent years due to factors like declining interest and a general population shift away from the agrarian villages into urban areas.

To help preserve these traditional practices, the producer we visited has begun hiring collectors as full-time, long-term employees, offering them year-round work for competitive salaries and even providing bonuses in recognition of advanced knowledge and expertise. Such employment opportunities mark a significant shift in this industry, as collectors would have historically worked seasonally and independently for multiple outfits—and very much according to their own interests. For example, if a strong rainy season were to spur an abundant mushroom harvest, few collectors would hesitate to drop plant collecting in favor of these more lucrative pickings. 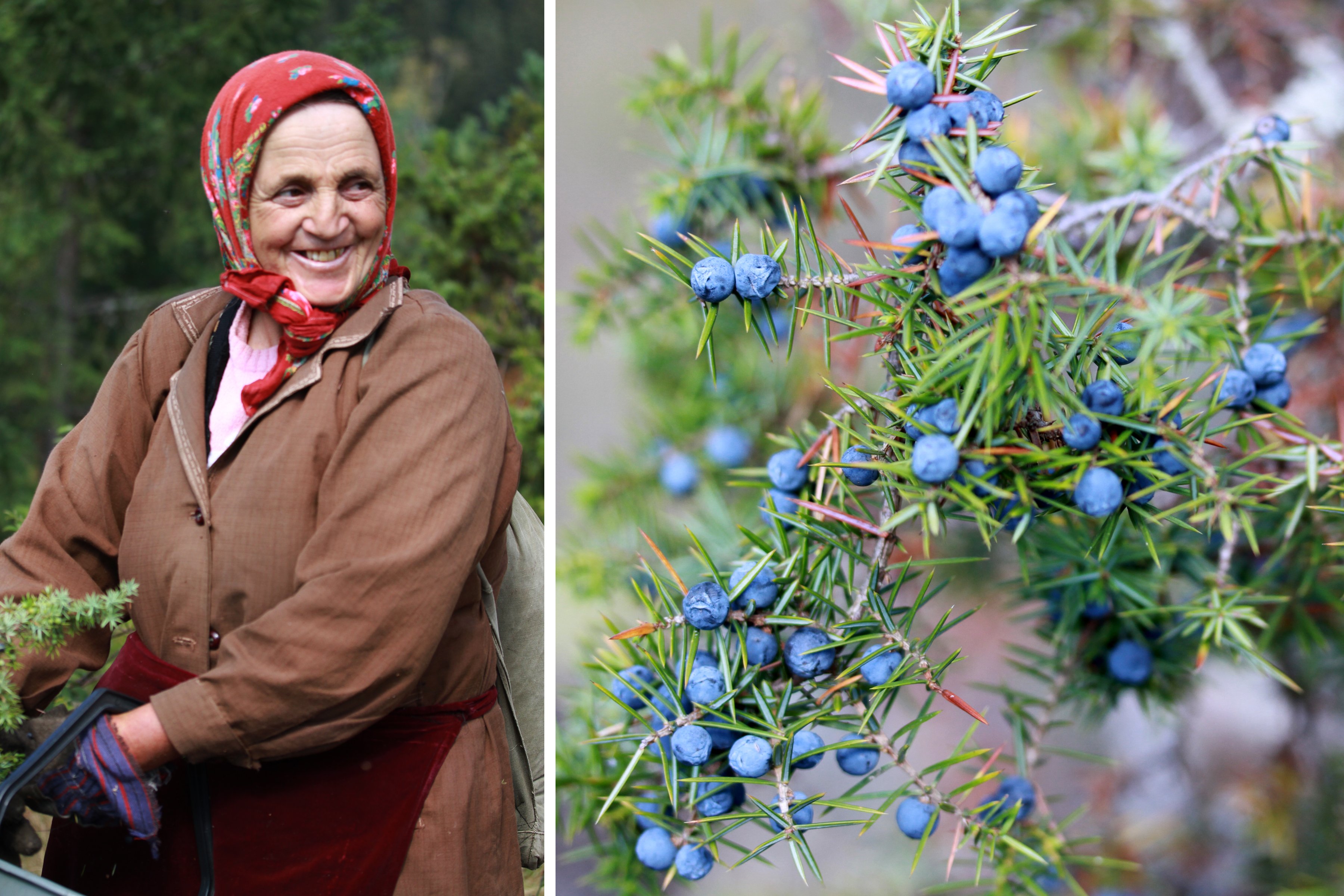 Gulka, an experienced wildcrafter, has been harvesting Bulgaria's wild bounty with her family for many generations. Wild collecting communities like Gulka's take great pride in their practice, and we're fortunate to benefit from their exceptional skills in locating, identifying, and properly collecting the precious plant treasures of their region.

We traveled up into the mountains to the village of Zmeitza at the peak of the juniper berry harvest, where we met Gulka, a seasoned collector who has been picking hawthorn fruits and juniper berries by hand for many years. Gulka and her family ascend these mountains during harvest season to gather fresh material and bring it down into the village to be placed in organic driers. She also harvests yarrow during the summer months until the season changes to  juniper berry harvest. Juniper (Juniperus communis) season starts in September and ends with the first snow. Each year, the collectors comb the different regions for which the local municipality issues permits for wild collection according to its plant population conservation schedule. 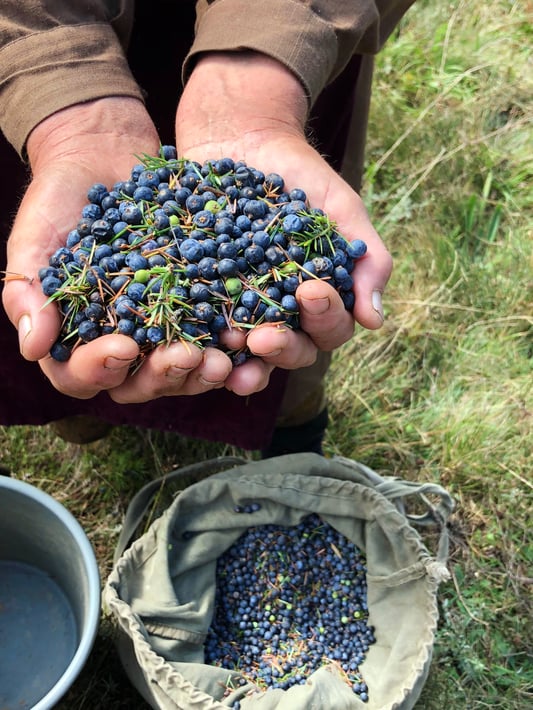 Gulka joyfully shows off some freshly collected juniper berries. By the peak of the September harvest, these fragrant fruits have ripened throughout the summer until reaching the height of their oil production. The high-elevation organic fruits are collected in lands that have been certified by third-party organic auditors. Collectors will rotate between these certified collection sites each year to allow harvested areas to rest and recover.

A large distillery occupies the ground floor of the village’s processing facility, where fresh botanical material is placed directly into the vats for distilling into essential oil. The facility had already worked its way through all the summer crops for the season, including yarrow, nettle, linden leaf and flower, elder flowers, and red clover blossoms. Now, processing of the late season harvests was in full swing—mainly juniper, but also some hawthorn berries, rosehips, and evergreens—during our visit, we witnessed white pine (Pinus sylvestris) boughs being brought in by the truckload.

From this somewhat mechanized but still largely traditional setting, we journeyed onward to a unique cultivation center housing a state-of-the-art tissue culture propagation facility. Here, plant parts are cut, sterilized, and placed on an agar medium blended with natural growth hormones to encourage cell growth in a completely controlled settings (each type of plant culture requires different environmental conditions, so various rooms are managed to accommodate each species). From this precisely cultivated tissue, many plants can be propagated and then slowly transitioned into a greenhouse environment and eventually nursery rows, wherein they gain the hardiness to weather the elements when transplanted into the field. Ultimately, the established plants will be dispersed to the facility’s large farmer network for commercial scale organic cultivation. This cultivation method provides several benefits, allowing growers to cultivate a surplus of plant material rapidly and at the same time ensuring species consistency across all the plants propagated. 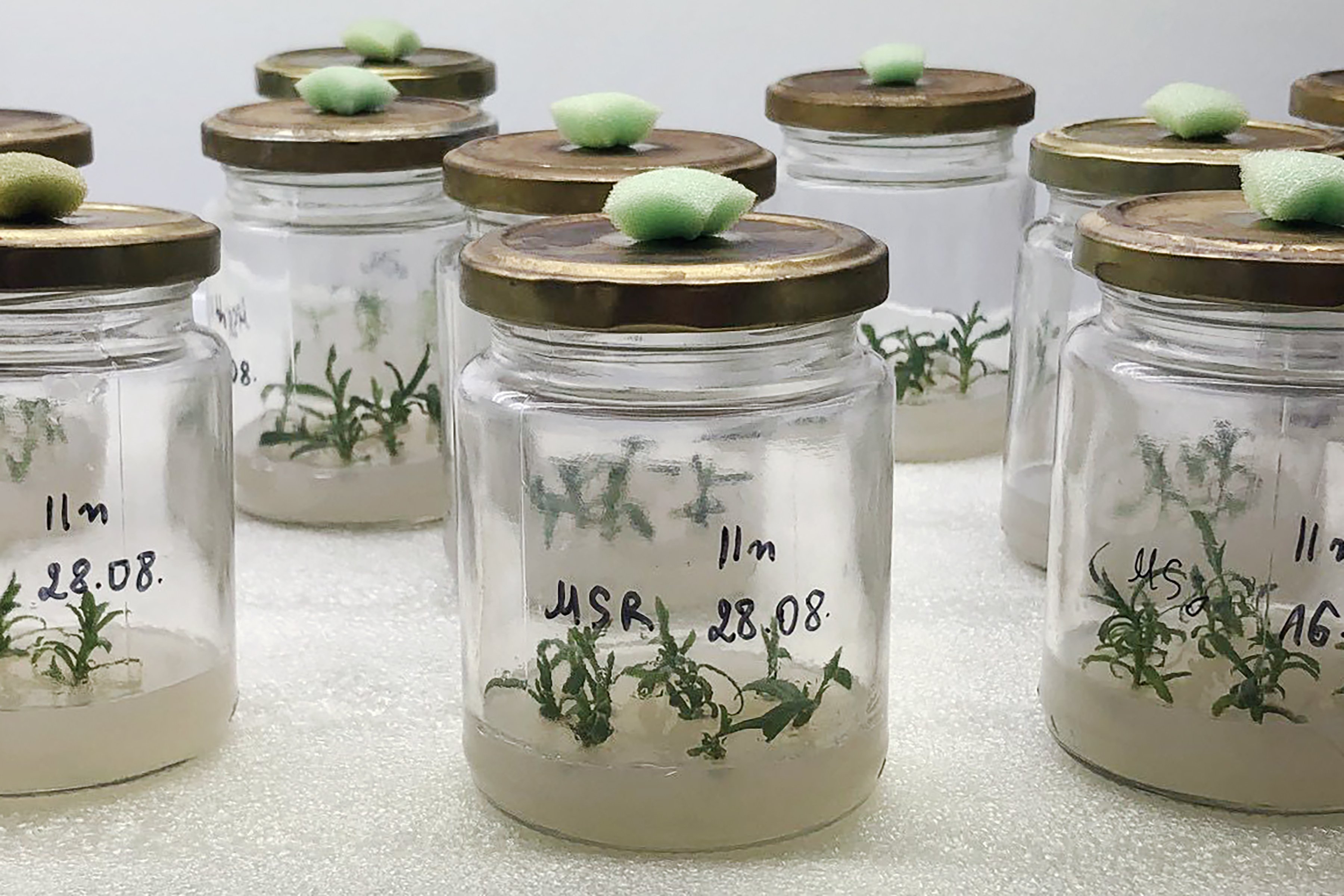 Jars of tarragon are cultivated en masse through tissue culture propagation for eventual placement in the field. This innovative practice ensures the desired species identification, allows the propagation of many individuals at one time, and facilitates germination of difficult to grow plants.

We were also intrigued and inspired by this particular lab’s experiments with woodland botanicals that are at-risk in the wild, such as goldenseal and black cohosh. While there is still much investigation to be done for these two species, the researchers are encouraged by their abundant success with other plants like lady’s mantle, licorice, and tarragon, as well as species of raspberry and strawberry prized for their leaf production.

Additionally, the laboratory team has also instituted an outreach project at the high school serving its surrounding agricultural community, designing and financing a plant identification and conservation program to encourage student exploration of this unique regional trade.

We left the facility and drove through the winding switchbacks of the Balkan mountains into southern Bulgaria, passing the occasional horse-drawn wooden cart along the way. The road offers vistas of rich farm lands patchworked with sunflower fields against a backdrop of rock cliffs. Small agrarian villages dot the roads, where homes made of hand-hewn wood and stone stand enshrouded by canopies of grape vines heavy with ripe clusters, just waiting for the villages’ annual wine making. 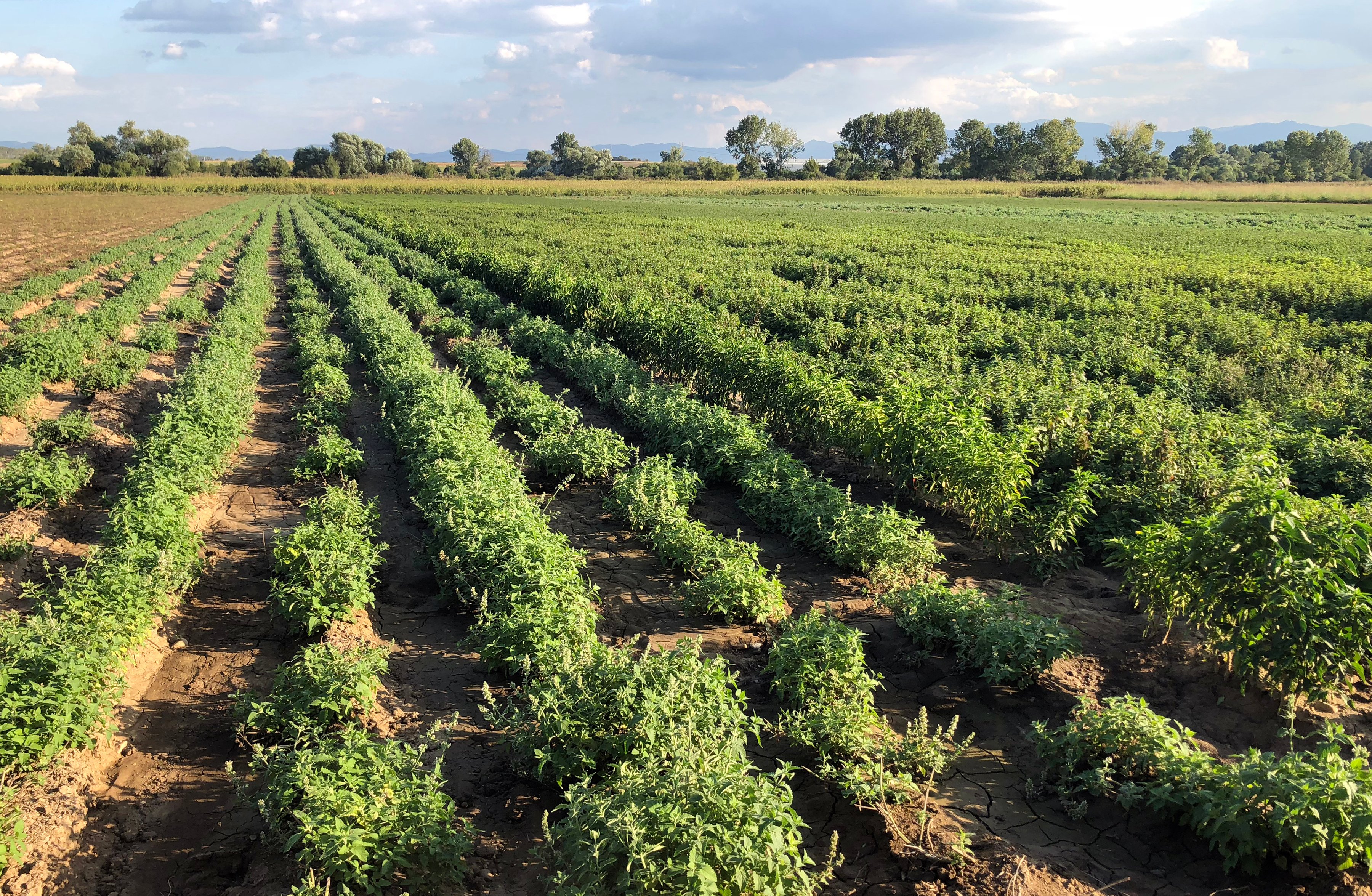 Organic farms thrive in Bulgaria's fertile soils, where many tea crops such as comfrey leaf and root, chamomile, coltsfoot, catmint, tarragon, and lovage are commonly cultivated.

We reach the lower lands and walk through the cultivation sites of many of our common botanicals, such as lemon balm, hyssop, marshmallow, tarragon, catnip, elder, and alfalfa. The fields are crossed by carved out furrows that distribute fresh water for irrigation. The hedgerows are thick with blackthorn, wild hemp, and wild hops growing together. A slight smoky scent wafts our way from some structures nearby, where sunflower hulls and peppermint stalks from the local farms are burned to fuel the driers for other crops. This corner of the world feels like it has supported agriculture since the beginning of time, yet our travels demonstrate how gracefully it has also adapted to the modern world’s changing and growing demands for aromatic and specialty plants—an inspiring and pristine example of sustained organic polyculture farming put into practice.

We are honored to partner with talented stewards who care so deeply for their unique natural environments, the biodiversity they support, and the incorporation of their traditions into a forward-thinking vision for their horticultural heritage.

Learn How We Support Sustainable Wildcrafting in Croatia, Albania, and Hungary! 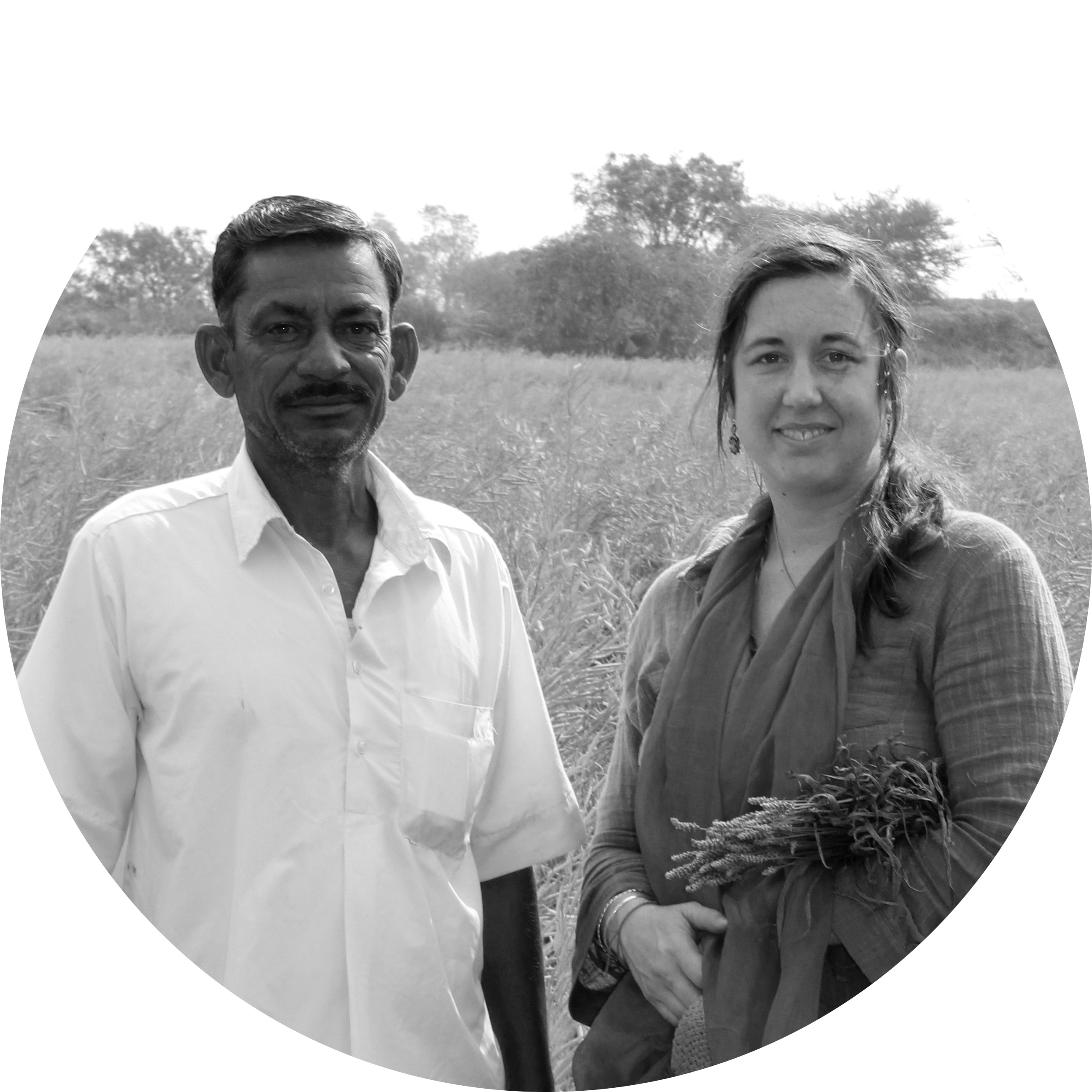