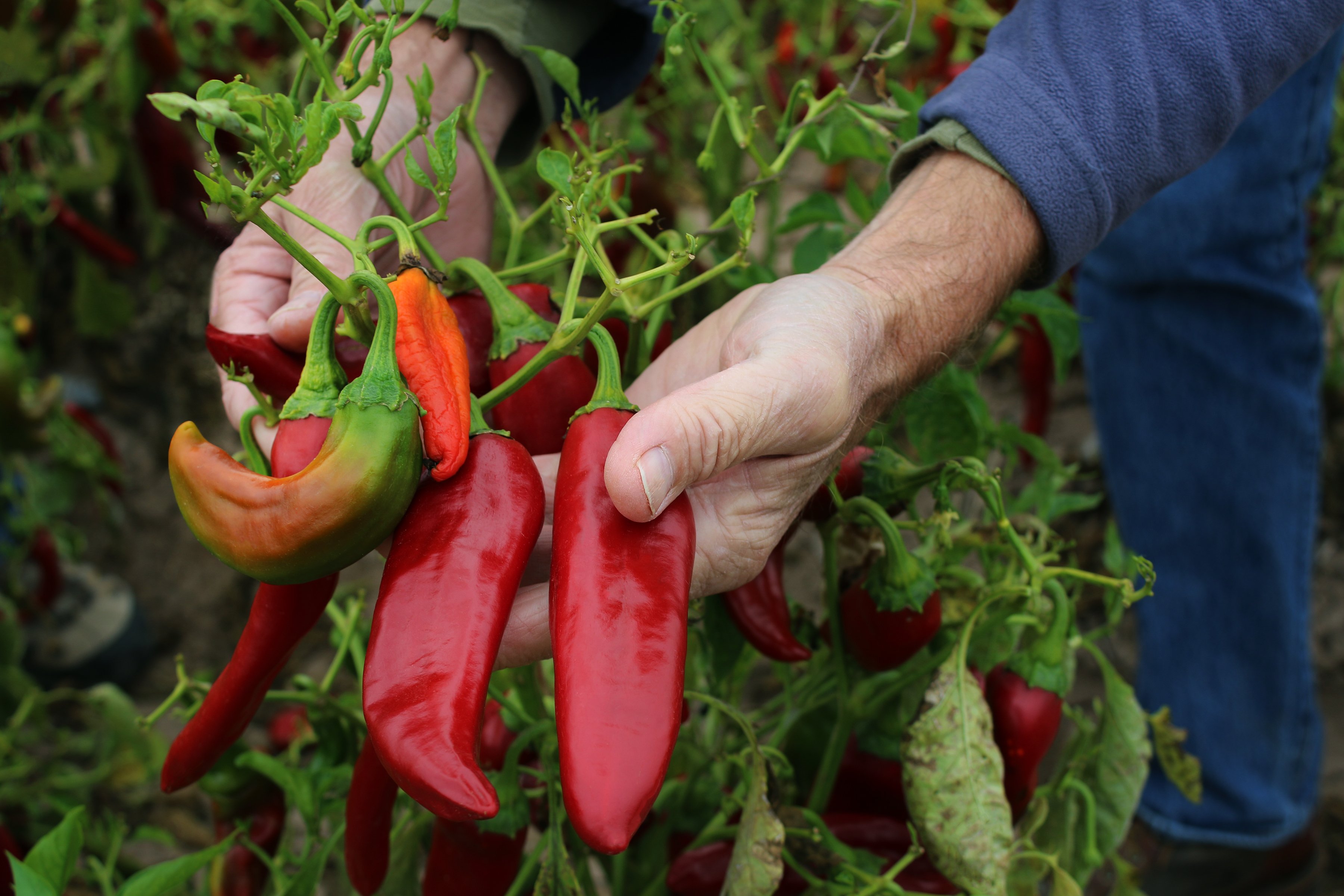 Our farm liaisons travel to the Southwest US to visit the family that's been channeling the region's heat into their top-quality organic chili powders for nearly a century!

As we walk through broad, lush pepper fields under a wide but heavily overcast sky, the last thing weighing on our minds is heat. In spite of the region’s reputation for fearsomely high temperatures, we’ve encountered nothing but sweater weather since reaching our farm partners' fields in the New Mexico desert two months after summer’s peak.

While guiding us through his fields, our host, Ed, assures us that if the patterns of recent years hold true, this early cold snap would break in time for one more push of sunny skies in November … but then again, when you’re calibrating your planting calendar to natural rhythms knocked out of time by climate change, it’s hard to put much stock in such predictions. If the cold persists, and the frost sets in, an entire round of harvesting could be lost. Nevertheless, this multigenerational farming family does what growers have always done in the face of unforeseen natural adversity—hope for the best.

Ed stands on generations of experience making the most this land and its gifts. Since arriving in this valley around the turn of the last century, this agricultural family has made it its business to grow some of the finest peppers and chilis in the country. These hardworking growers began selling spices on a commercial scale in 1935, and the family founded the business that became its present-day organic farming/processing operation about 60 years later. Ed’s father still works on the farm today, his grandfather pitched in well into his 90s, and the next generation is prepared to carry this family-owned operation into the future. 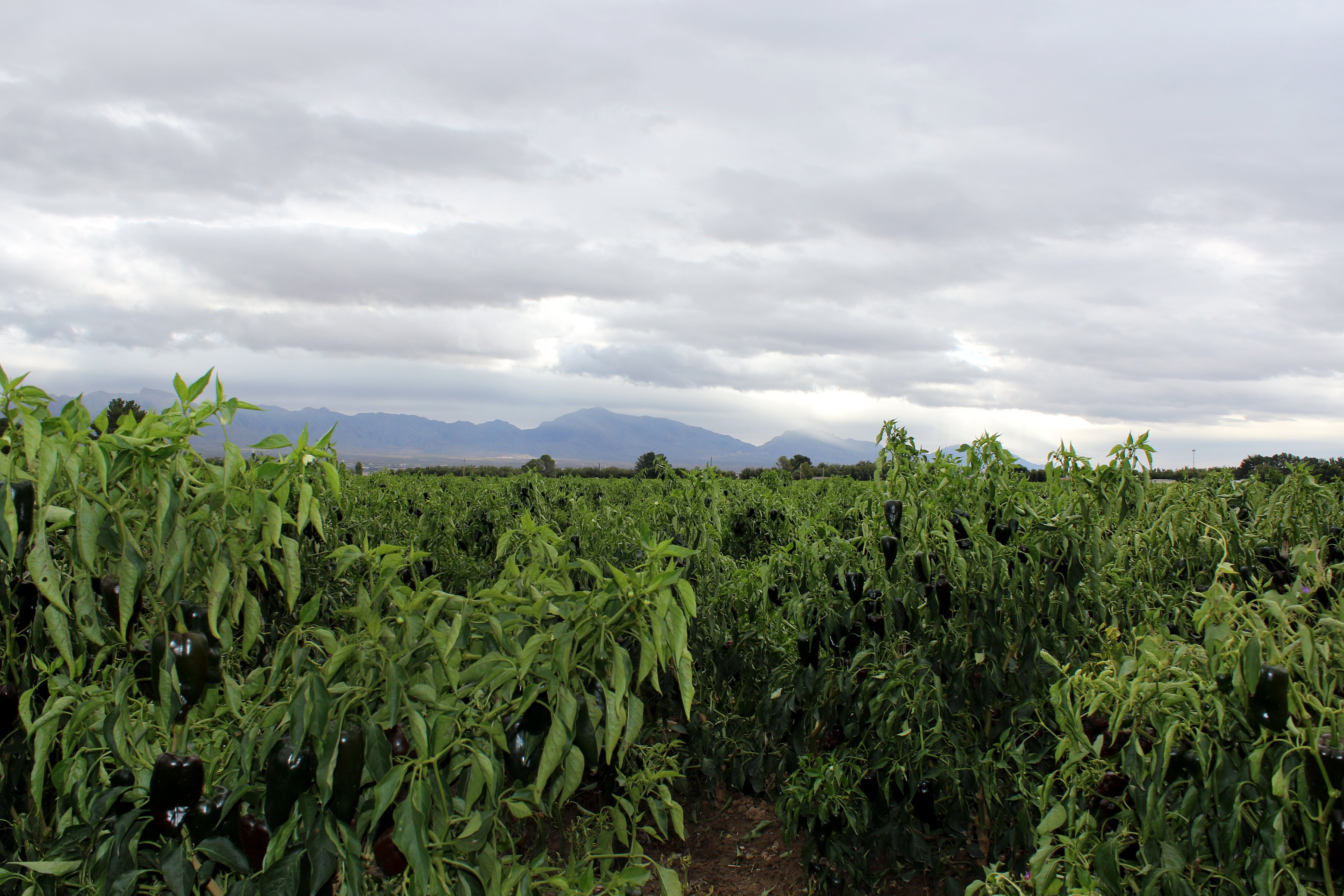 Ed and his kindred have amassed much field wisdom over the decades, enabling them to pick and choose the best solutions from 100+ years of agricultural know-how. For example, the family has learned through countless rounds of crop collection that, when you want to maximize harvest quality, there’s no substitute for the traditional hand-picking method. That’s why two out of three of the farm’s annual pepper harvests are done by a crew of experienced hand harvesters. Since the peppers on a given plant will ripen at different times, they are collected in three sessions spread throughout the year. Human selection by skilled hands and eyes ensures that only healthy peppers at their peak are collected for processing, leaving others to mature for later collection.

While the cost of paying full harvest crews is significantly higher than using equipment, Ed tells us that the difference in what hits the processing floor is well worth the investment. He tells us that where a handpicked harvest will contain almost only useable material, a machine-collected harvest will include a sizable proportion of other plant parts and compromised fruits (all of which will need to be removed at the processing facility to allow for even drying).

As we walk down one of the long green and red rows, Ed schools us on the color and texture differences between still developing chilis and those ripe for the picking. He also shows us something that, fortunately, few pepper-lovers ever see—a “ghost pod.” Pale, dry, and hollow, this aptly named husk is all that remains when a healthy, vibrant chili succumbs to damage or disease. When an insect, bird, or hail storm punctures a pepper’s skin, the plant cuts off nutrients to vulnerable fruit, causing it to blanch and shrivel into a tasteless, spectral shell. Our guide tells us that ghost pods are just one type of natural debris that must be removed to ensure a high-quality end product for their customers, and he invites us to head over to the processing facility to see where and how this important work is done. 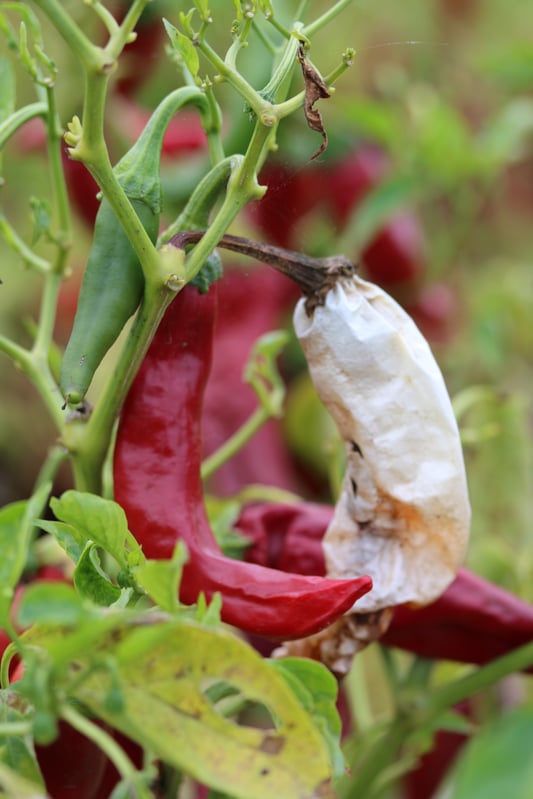 A desiccated "ghost pod" alongside healthy chilis. The plant has cut off this damaged pod from nutrients to conserve its resources, leaving a blanched and shriveled husk behind.

We hop in Ed’s pickup for a ride to the farm’s organic processing facility not far down the road. We pass pecan and cotton farms along the way, two of the area’s other top agricultural industries (albeit much more resource-intensive ones than growing hot-peppers, which are naturally pest-resistant and can be efficiently watered with drip irrigation). When we reach the small cluster of buildings, Ed takes us to the large conveyor belt where material sorting begins. Bushels of harvested peppers are poured onto the belt, which automatically knocks off some of the larger excess plant matter that has hitched a ride from the field. Further down the line, belt attendants sorts through the material hand, removing smaller plant detritus, ghost pods, and any sub-par peppers that may have slipped in with the ripe ones. From there, the fresh peppers are dropped onto drying racks which, once full, are passed through the drying tunnels. Drying temperature and duration will vary depending on a number of factors (air moisture, type of pepper, etc.), but a typical batch will take between eight and 16 hours to reach specified levels. 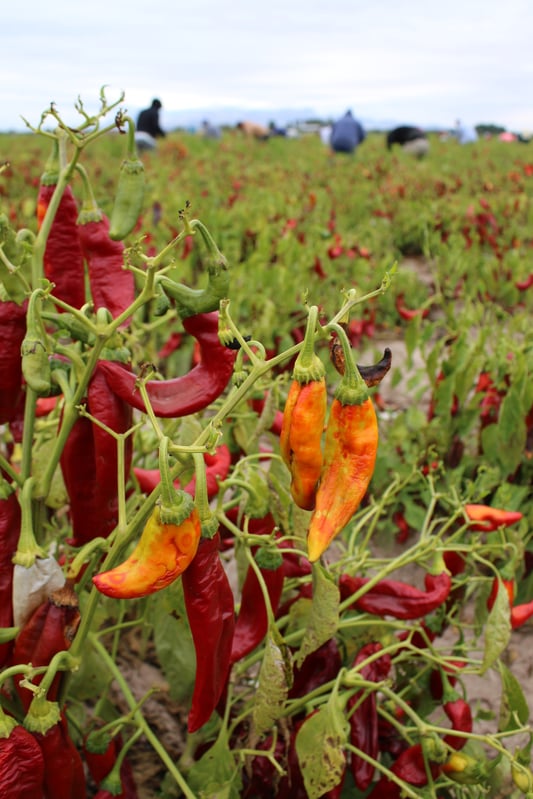 The makings of our organic roasted red chili powder ripen in the fields, awaiting harvest at the hands of our skilled farm partners.

When we ask Ed what has inspired his family to stick with this business year after year. He says it’s all about perfecting old skills while also finding new applications for their established expertise.

One reason the farm’s produce is so exceptional is that his family spent decades selectively breeding their own cultivars of ancho and habanero peppers, specially tailored to the growing conditions of their valley. In recent years, however, they’ve kept things fresh by experimenting with super-hot and exotic pepper cultivation. Under the heat of the midday sun, these extra spicy varieties can release pepper fumes that can be painful for pickers—so they’re harvested in the middle of the night instead! Farm liaison David bravely volunteered to sample one of these spicy varieties … but wisely declined a second helping! 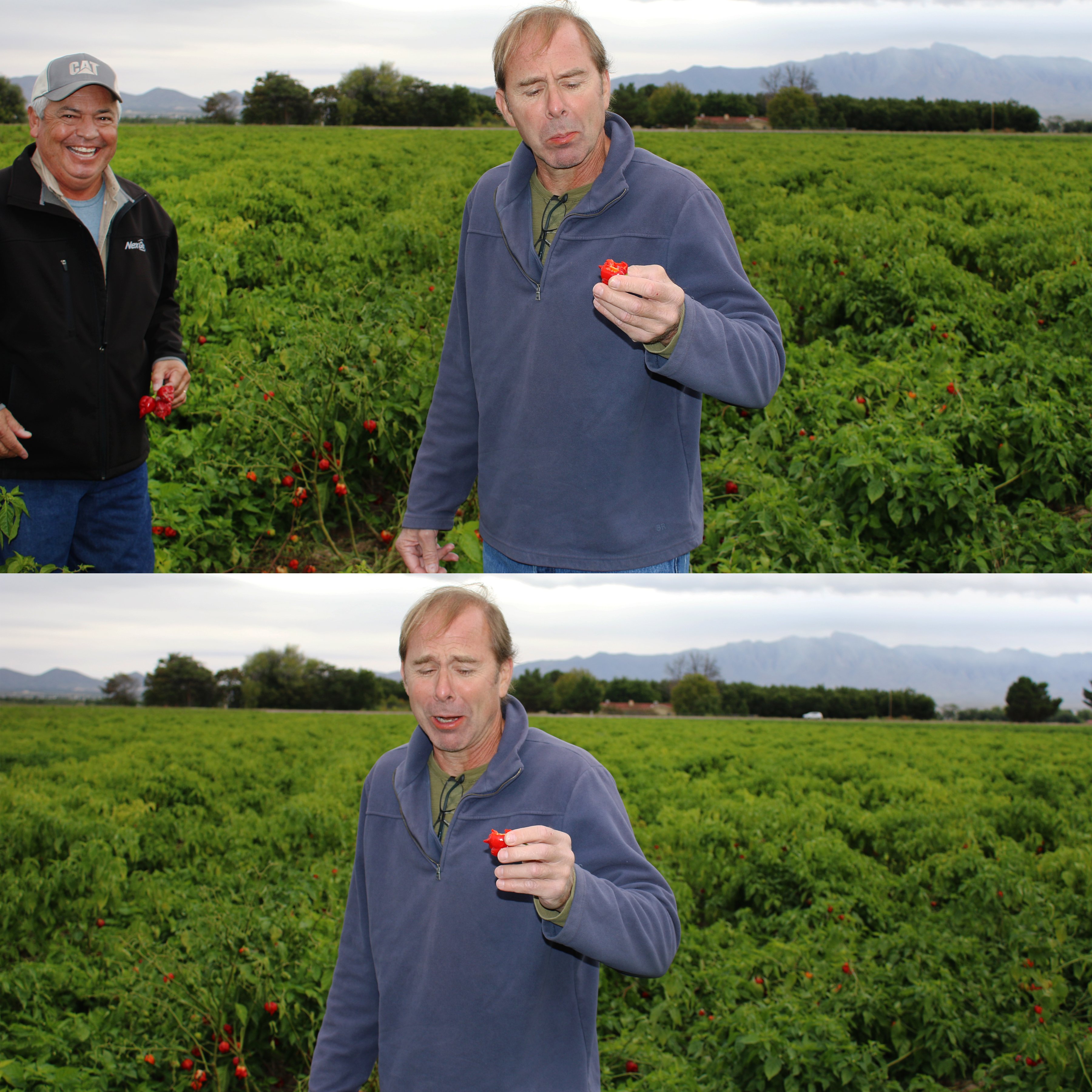 Farm liaison David experiences the sting of the aptly named scorpion pepper, one of the super hot varieties Ed's family has begun exploring in recent decades.

Learn About the Growers Pioneering Organic Rhodiola Cultivation in Alaska 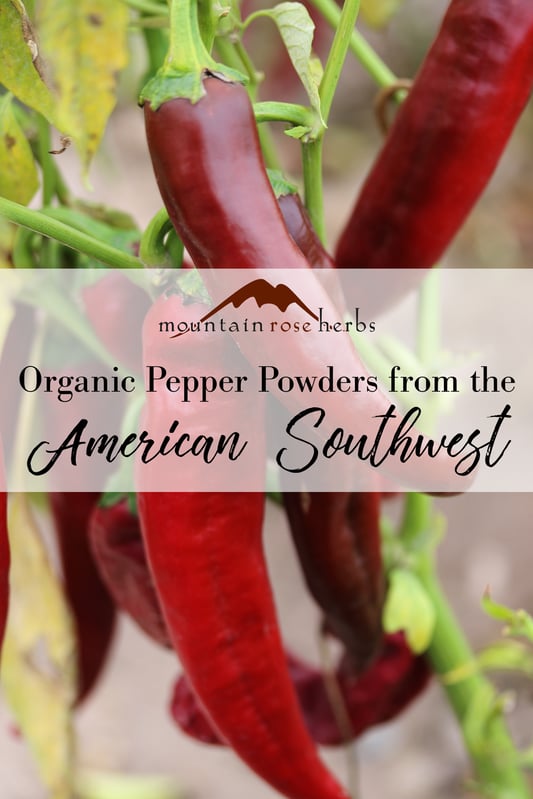 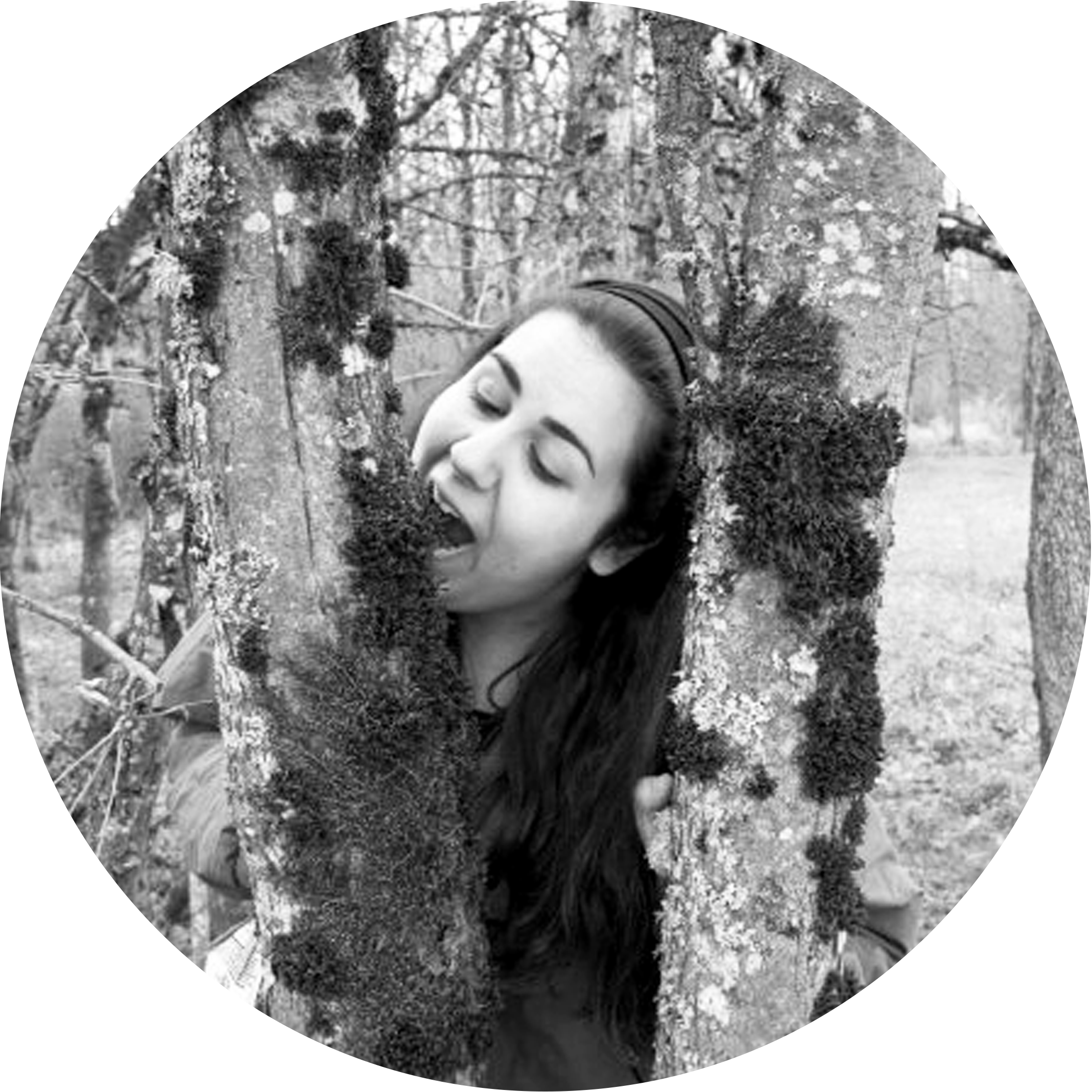 Meghan, Procurement Manager, works closely with our farms and other vendors to ensure a steady supply of high-quality herbs, teas, and spices are available. She studied Appalachian herbal medicine at Davis & Elkins College and has taken classes with Wild Food Adventures in the Pacific Northwest. Meghan enjoys learning something new every day about the growing and harvesting techniques of all the botanicals we work with. Outside of work, you can find her doing anything crafty, from glass bead making, to sewing, to knitting. 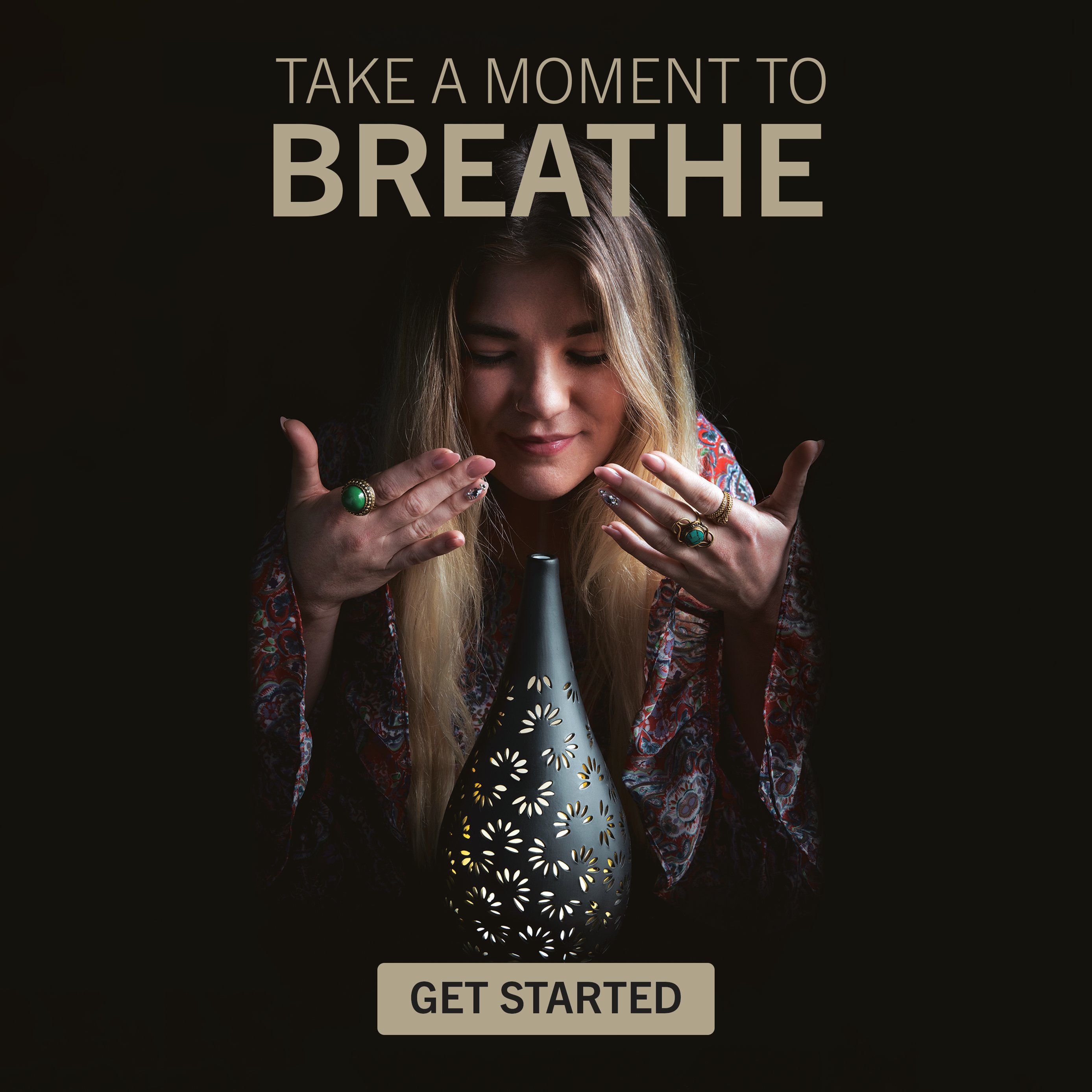