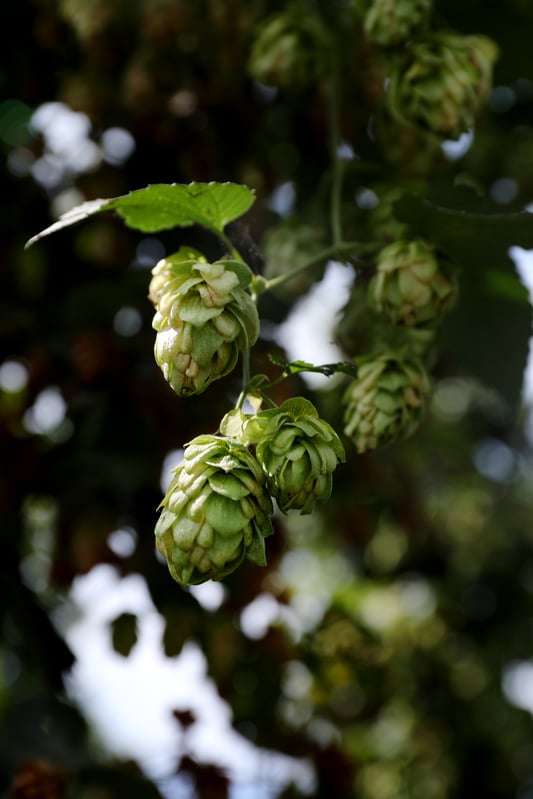 Experience the 100+ years of history behind our organic hops from a third-generation Oregon farming family, from harvest through processing!

As we step out of the car on a sparkling August afternoon, we’re immediately hit with a wave of intensely fresh, funky fragrance—the scent of hops ripe for the harvesting. Farmer Pat greets us in front of his home, which stands to the side of the fertile acreage his family has owned and cultivated since 1912. As we exchange introductions, we exclaim over the intoxicating aroma drifting from the fields around us. Pat glances back at his hop vines with a brief look of satisfaction, but when he turns back to us a moment later, his look is more serious than proud.

“They’re looking good now, but it hasn’t been easy. We had some challenges this season, and now we need to get our crops harvested while the conditions are right,” he says. “Then again, growing organic hops is never easy.”

We climb into Pat’s pickup and roll out into the fields themselves, right alongside a row of vibrant green organic Fuggle hops destined for the pantries and apothecaries of our customers. This heritage variety originated in England back in the 1880's, and its natural resistance to several of Oregon’s common pests makes it an attractive choice for an organic grower. Pat’s grandparents began cultivating Fuggles in the wake of a downy mildew blight that hit the budding American hops industry in the early 1930s, just a decade or so after the family began growing the crop for sale to overseas brewers (during U.S. Prohibition). 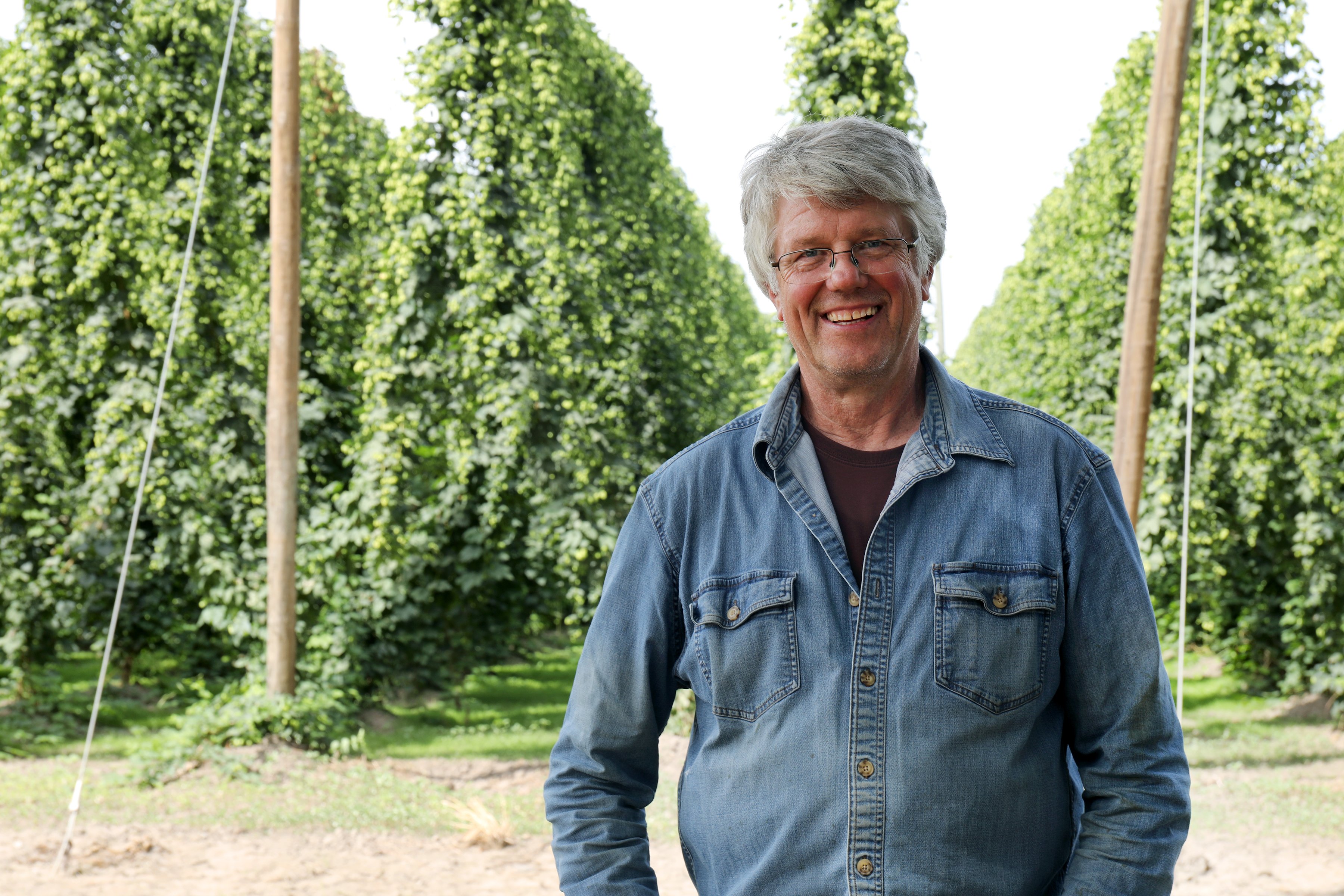 This crop of lush Fuggle hop plants is a testament to Pat's hard-won expertise in the still developing field of organic hops cultivation.

When Pat began growing this and other hop varieties organically in 2007, he was the first Oregon farmer to do so—and as he shared with us, it wasn’t easy. Because hops come to fruition so suddenly, completely, and fragrantly, they are extremely attractive to detrimental insects and molds. Natural pest resistance only goes so far in non-GMO hop species, so Pat has had to explore other techniques to bring his vines into healthy flower. Since robust plants tend to be more resilient, Pat prepares his soil with a fast sprouting fall cover crop that can be tilled-in by April, before the perennial hops sprout up for another year's growth. He further fortifies his crops with a mix of natural fertilizers, including chicken manure from local organic farms and composted plant matter from his own past harvests.

In addition to this preventative approach, Pat also goes on the offensive against aggressive pests by bringing in some local reinforcements: Stethorus punctum picipes, a.k.a. “spider mite destroyers.” When released with proper timing and conditions, these native beetles can dramatically reduce pest damage to Pat’s crops, but as with all farming, unexpected weather changes make precision difficult. This year, Pat had to release two rounds of beetles due to an early mite outbreak.

As a grower who firmly believes that organic agriculture is critical to the holistic health of the environment, Pat embraces the need for a diversified pest management system. “It’s the only long-term way forward,” he says. “Farms keep using more and more chemicals, and pests just keep adapting to them. At some point, there won’t be anything left to use—so you need to be smarter instead, more strategic.” 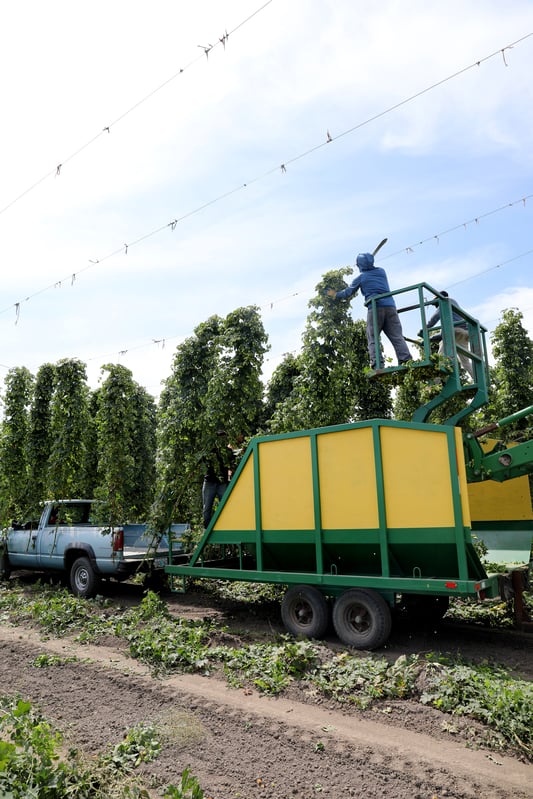 A crew led by seasoned harvester Ernesto cut free-swinging hop vines free from their upper support grid before carefully laying them in the collection trailer.

Pat’s crew is hard at work bringing in the first harvest of the season. The field before us is striped with row after row of v-shaped tunnels: hop vines growing up strings attached to an aerial grid suspended 15 feet above the ground. The crisscrossing twine squares are strung across regularly spaced juniper poles, which contain their own natural preservative that keeps them standing through many seasons of use.

Using only a small truck with a trailer and some farm machetes, crews led by experienced workers like Ernesto harvest each whole hop vine by hand. To bring in a row, a crew member cuts the vines at their base so that they hang freely from the string grid above. Then, a small truck crew slowly but steadily rolls alongside as a worker mounted up top cuts each swinging vine free and lets it fall into the waiting hands of the crew members below. Pat points out the deliberate way in which each vine is laid in the trailer, explaining that keeping the vines tangle-free is crucial for smooth unloading when they reach the processing barn. Despite the care required, the harvest crew averages 9 to 13 vines per minute, allowing them to bring in the 1,800 that grow on each acre in roughly 90 minutes.

We follow the trailer full of greenery back towards Pat’s house and into his processing barn. The high-ceiling facility is noisy, warm, and bustling with activity. The truck brings its load to a stop below a diagonal cable studded with hooks traveling in a constant upward track towards the top of the processing system. Without hesitation, skilled hands lift the end of a vine from the pile and attach it to a hook, which pulls the rest of the vine out and up at an impressive clip. By the time its tail end emerges from the truck bed, another rope of green goodness has already been attached to the moving line. We see now why neatness during harvest is so important—a jumbled knot of vines could never be unloaded with the speed required for efficient processing. 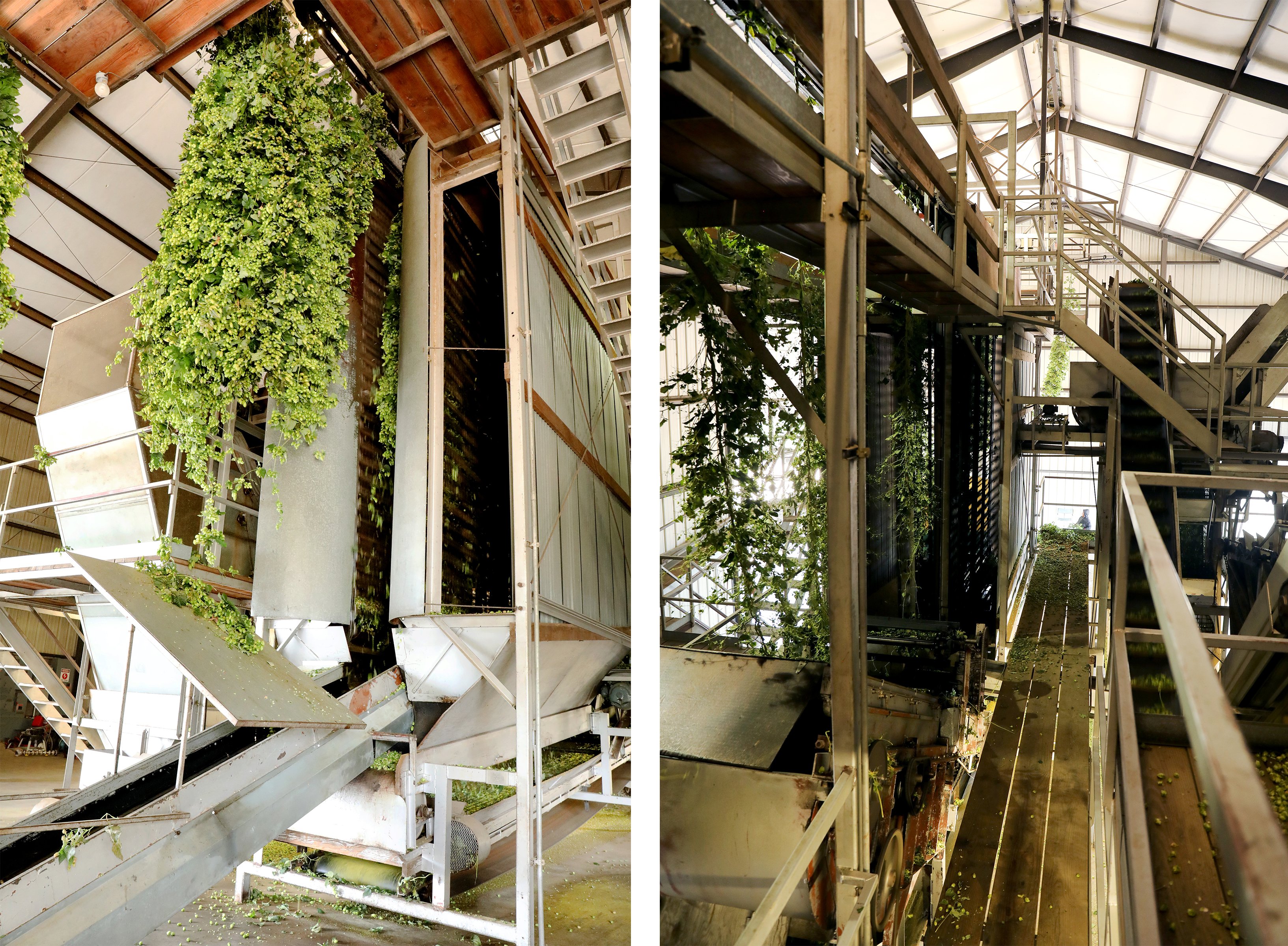 Intact hop vines straight from the fields travel through a tunnel of sorting fingers (left). The stripped vines are carried out for compost, while the flowers are poured through a chute for further sorting (right).

As the vines travel upward, they pass through a blur of mechanical “fingers” that strip off the hops and leaves. While the ropy remains are carried down the discard chute for composting, everything else continues onward through the ingenious process of separating the hop flowers from the rest of the plant matter. The plant material starts at the top of the apparatus and moves downward through the steps, resulting in a final batch that is 96 to 99% hop flowers, depending on variety.

The remaining sorting steps rely on three dimensions of difference between the hop flowers and leaves: size, shape, and weight. Since full leaves are bigger than flowers, the harvest material first passes through a series of screens that sift out large leaf matter and carry it away for composting. Then, since egg-shaped hop flowers tend to roll while leaves do not, the material travels across a series of slanted textured conveyor belts that allow flowers to roll off and through for further processing while carrying away flatter leaf pieces. In the final step, the twice-sifted material passes under a blower, which disperses the remaining small, light plant debris while leaving the denser flowers to finish their processing journey.

In the second stage of sorting, the harvest is fed onto a belt that allows hop flowers to roll down for final processing, while leaf debris is carried away.

The triple-sorted harvest is carried out of the bustling sorting room into a quieter adjacent area—the drying kiln, known in olden days as an “oast.” Here, the hops are evenly distributed across a mesh-bottomed loft room covered with a clean, breathable fabric tarp. From below, a large fan blows an even stream of 135° F air up through the loft floor, and after drying for around six hours, the hops are ready to be pressed and baled for sale.

It’s hard not to be impressed by the streamlined efficiency of this processing system, and Pat certainly doesn’t take it for granted. While Pat took over the farm from his uncle in 1978, he started helping out there in his early teens, and this gave him the opportunity to experience some decidedly more “old school” hop processing methods. Up until 1967, the farm’s flowers were dried in the “old hop house,” a venerable structure that still stands near the family homestead today. While now in partial disrepair, the original structure featured two oasts, drying lofts not too dissimilar to Pat’s modern kiln room and topped by vented towers that allowed heat to circulate up and out of the building. However, instead of carefully regulated industrial fans, hop house drying relied on large wood-burning furnaces (one for each oast). The stoves were channeled through metal duct-work underneath the oast floor and vented out the side of the building, allowing heat to emanate upward to dry the hops while preventing smoke from flavoring them (“Well, most of the time,” Pat tells us). 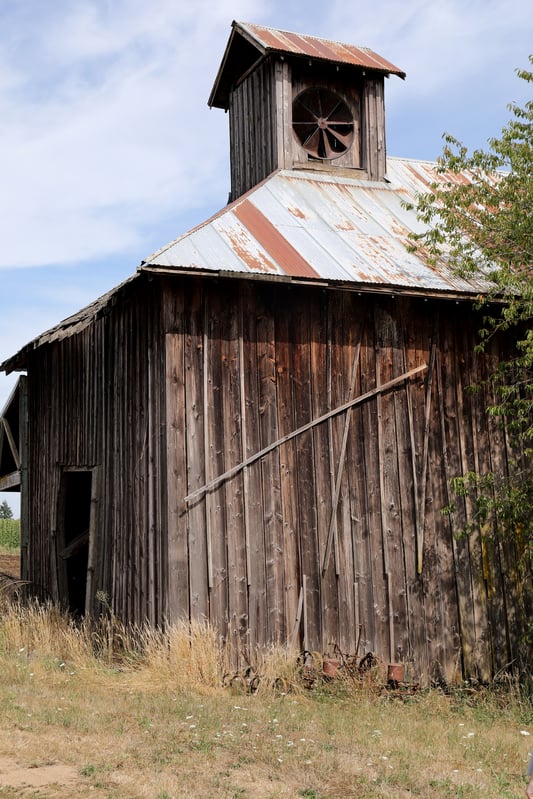 While "the old hop house" was retired decades ago, Pat still remembers helping to dry harvests with uncle and cousins using the same methods as his grandparents.

While Pat greatly values this piece of family and industry history, his early experiences have instilled in him an enduring appreciation for processing innovations available to him today. And after all, modern day hops growers like him still face their share of challenges.

“Organics are still very new in this industry, and there’s still so much we don’t know," Pat says.

"When I have a question, there aren’t many resources out there, so in a way, each year is its own experiment. But there’s also a lot of opportunity to grow and improve, and thinking big-picture, I don’t see another way forward, so that’s why I keep at this.”

Want to Meet More of Our Local Growers?

Get the Story Behind Our Oregon-Grown Fresh Extracts! 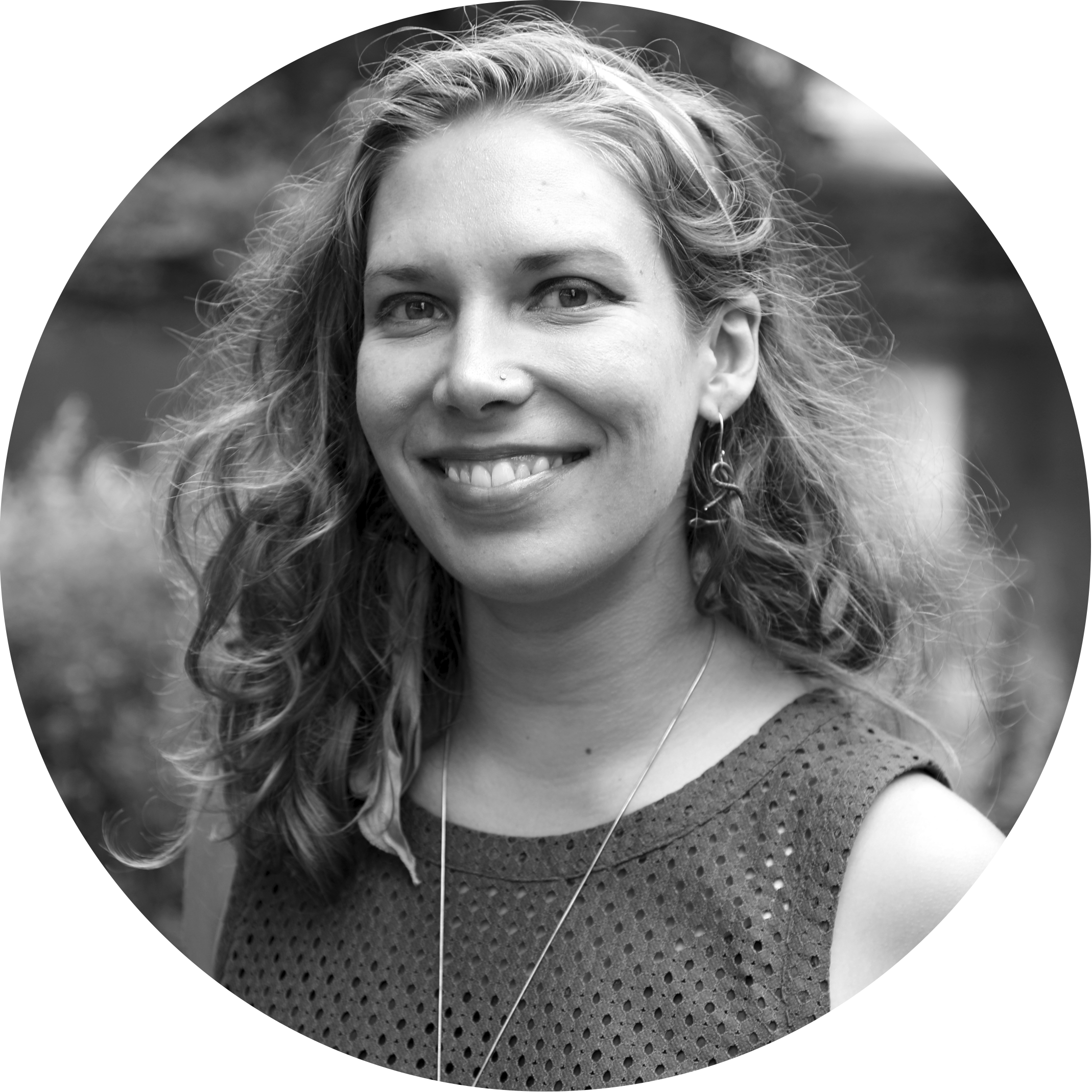 Jana DiSanti is a marketing writer, editor, and strategist who holds a Master of Business Administration with an emphasis in Sustainability. She has also earned a bachelor's degree in psychology and enjoys exploring techniques that help people change their everyday behaviors to make better use of our precious environmental resources. She's spent her career promoting businesses that strive to better the world, and she loves how passionately her Pacific Northwest community supports that mission! She firmly believes that rethinking our food systems is essential for worldwide human and ecological health, and she is thrilled to help support Mountain Rose Herbs in providing responsibly sourced herbal offerings to its customers. Off-work hours will find her hiking, camping, and mushroom-hunting in Oregon's wild areas, volunteering at her local farmer’s market, or cooking, gardening, and corralling chickens at home.