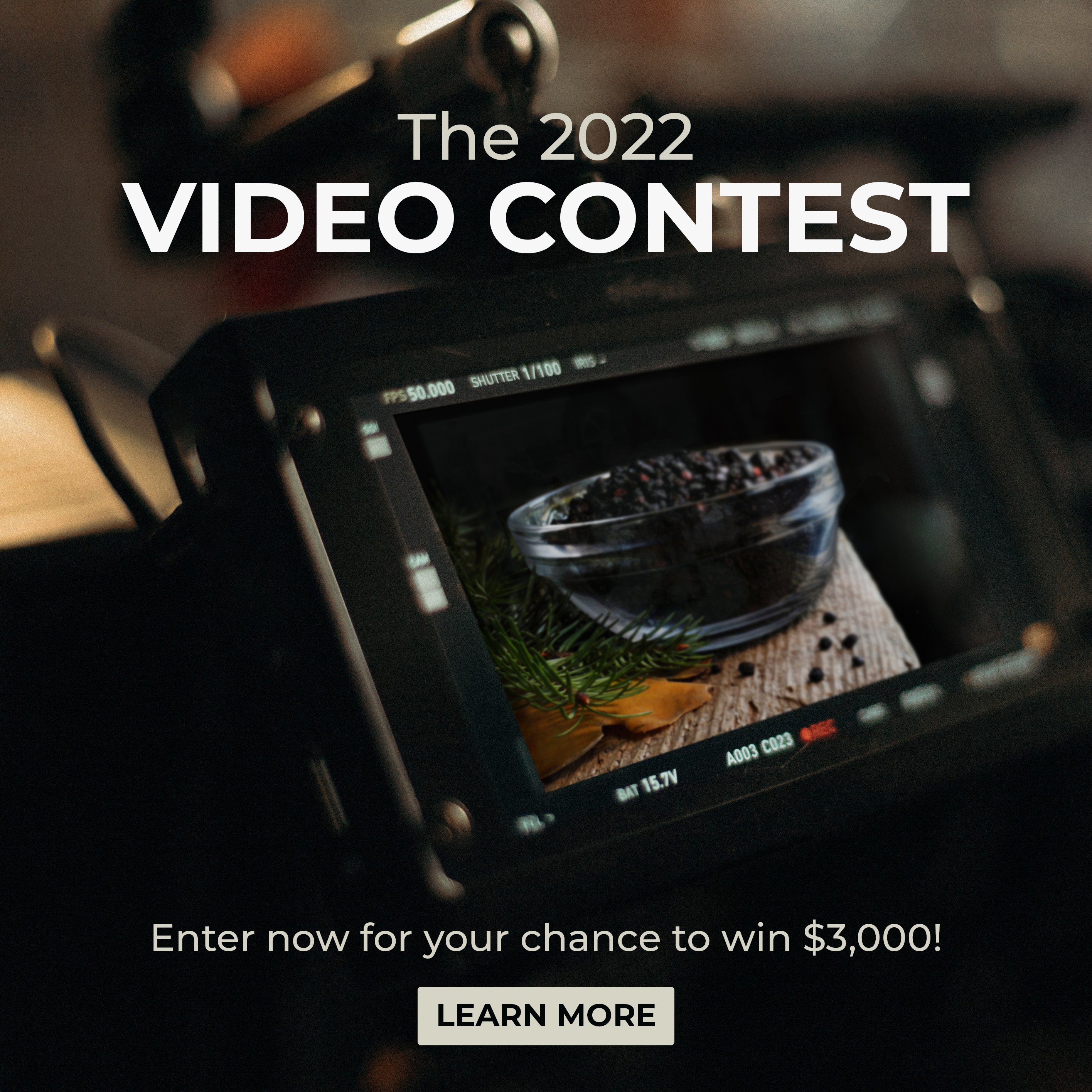 In 2009, we hosted our first video contest and with the growing interest in short-form video, we thought that 2022 would be the perfect time to bring it back! We want to see your creativity and love for a natural and sustainable lifestyle. One winner will be chosen to recieve $3000! 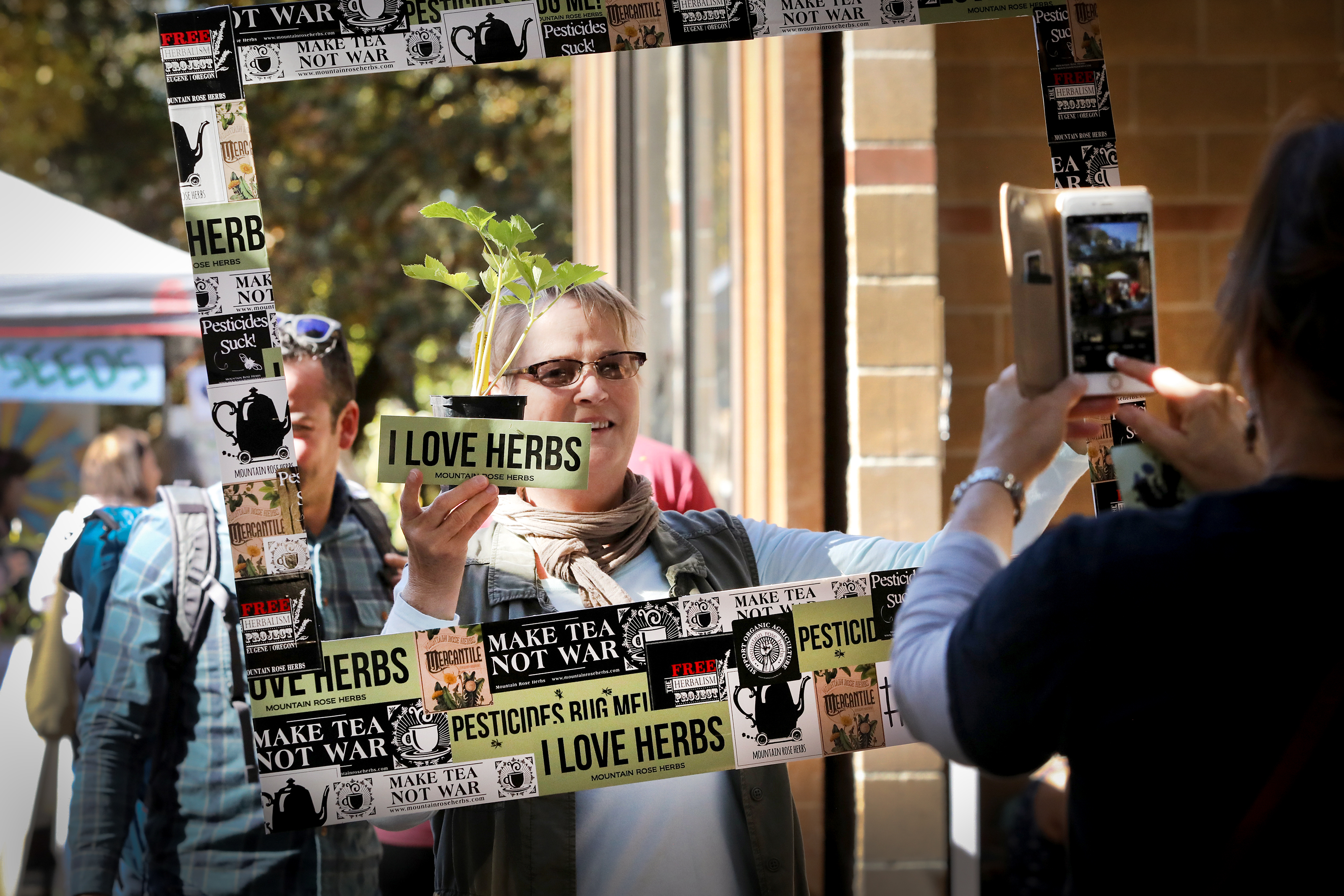 It is with great joy that we share this list of virtual and in-person herbal events. Whether it’s herbal festivals, educational conferences, natural product tradeshows, or wilderness conservation fundraisers, we’re excited to be able to connect with you all again! Mountain Rose Herbs is honored to be able to host, sponsor, and participate in each of the below events.

It is mighty cliché to start a health and wellness blog with a Hippocrates quote, but I am willing to sacrifice originality for truth. The old adage “Let food be thy medicine and medicine be thy food” is still worthy of repeating some 2,400 years after it was first uttered and despite centuries of medical and health advances, it is still relevant today. In this modern age, especially in America, many of us are living with nutritional deficiencies and are at a higher risk of experiencing food-related illnesses. 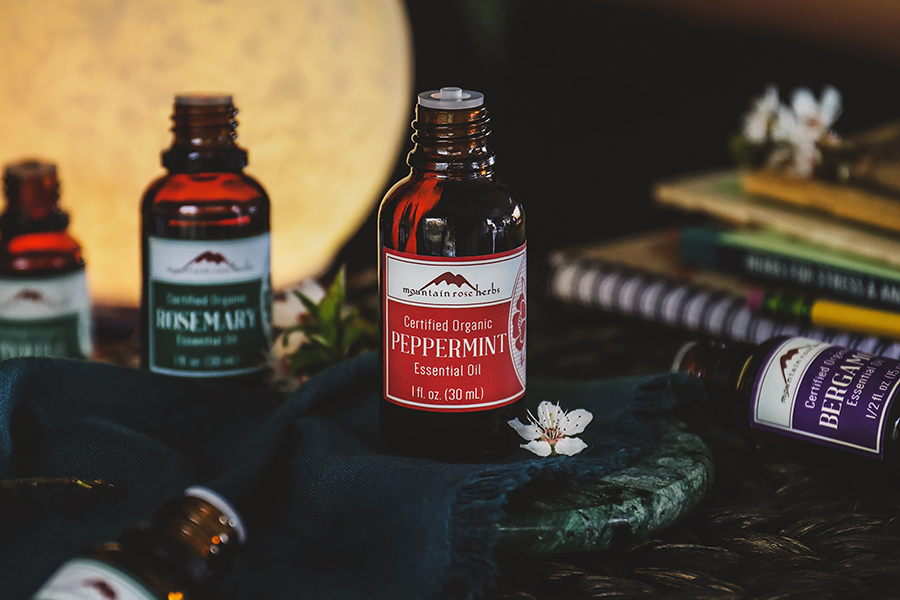 In the fast-paced world we often find ourselves in, it can be hard to get in the right headspace to study or concentrate on what I call “sit-down tasks.” When I’m experiencing circular thoughts or find myself reading the same paragraph several times over, I know I need to reset my mind and body. I’ve learned that for me, stepping away from my desk, diffusing an invigorating essential oil blend, and stretching my body improves my mood and brings freshly oxygenated blood for more energy.

Circular thinking is pretty common with stress. Circular thinking starts out as if there is a linear process going on, but there’s no real end. If a problem is settled, the person may go right back to the beginning and start all over again. It’s part of that cycle of starting to question why you did or said that stupid thing, and how it could have been different. Sometimes it can be one particular instance, but in really intense periods, it can involve almost every cringe-inducing interaction that’s ever taken place. It can be pretty awful.

As a reader of our blog, you may be somewhat familiar with a plant or two (or maybe a lot more than that). Herbal allies like echinacea and lavender have become household names, but what about some of the more uncommon herbs in circulation? While Mountain Rose Herbs is a purveyor of many familiar spices, we are also proud to provide an assortment of lesser-known organic herbs. Many of these underused herbs make effective substitutes for popular staples and are a fun and unique addition to the home apothecary. As always, we recommend consulting a qualified healthcare practitioner and conducting your own research before using new or unfamiliar herbs. END_OF_DOCUMENT_TOKEN_TO_BE_REPLACED
Posted by Elise

A Beginner's Guide to Herbalism

Are you interested in learning about herbalism, but aren’t sure where to begin? Many of us grew up learning more on this subject than we realized; we drank teas when we didn’t feel well, or we put our head over a bowl of steaming vapor, or we ate a dish with curry for digestion, things that our parents or grandparents told us to do without ever saying the words “herb” or “herbalism.” When I was growing up, my father decocted ginger root for an upset stomach and pulled out chamomile tea for sleeplessness. He gave me raw honey for a scratchy throat and sour cranberry juice for bladder health. And yet, ironically enough, years later, when I developed a huge interest in this new thing—herbalism—I thought I was clueless on the subject. A lot of people have stories like mine; they don’t have any idea how much they know, or if what they know is correct or helpful, or how to begin to find out. If you’re ready to jump in, but aren’t sure how or what direction to aim, here is some helpful information.

When you first start wearing botanical perfumes, you may notice how brief the aromatic lifespan of some blends are. Sometimes this is the desired effect or is simply the result of formulations that are restricted primarily to top notes. Other times, it’s preferable to have the perfume linger so as to enjoy the shapeshifting nature of the aromatic dry down, as each layer of scent molecules is revealed and then evaporates at varying speeds. Done well, this creates a complex symphony of aroma that leaves one marveling at the multi-faceted nature of the fragrance.

Many of us who are cast iron cooks have read reams of advice about the proper way to season our cast iron pots and pans. To use soap or not when washing, which oils to choose, using a burner vs. the oven, whether or not to add salt—this is one of those topics that people have strong feelings about. I get it, because two of my cast iron skillets were handed down to me from my grandmother, who received them as a wedding gift in 1917. She spent decades perfecting their seasoning. Those skillets came to me in mint condition and they arrived with the stipulation that I maintain their perfection for all the years of my life and teach the next generation how to continue on in the same vein. No pressure or anything!

It’s late winter in the Pacific Northwest and signs of spring are already starting to show themselves. I’ve always enjoyed this time of year, the excitement of witnessing the Earth waking up from her wintertime slumber and the feelings of hope that brings. But despite the heartfelt joy, I often find myself struggling to move from the slower pace of winter hibernation to the quickening energy and longer days full of garden prep, housework, and other to-dos that piled up. Thankfully, I need to look no further than my trusty green ally, nettle, for support during this transition.

Osha root (Ligusticum porteri) has been in use as an herbal medicine, incense, food, and for ceremonial purposes for thousands of years. When European colonists arrived in North America, osha was already being widely used by First Nations People in the American Southwest and Mexico to treat a variety of conditions, particularly those involving the upper respiratory and gastrointestinal tracts. The Zuni people chewed the root in healing rituals and the Tarahumara people used it ritualistically in protection ceremonies. This herbal ally has been generously gifting itself to humans on our continent for millennia, and its renown has spread to other parts of the world. Unfortunately, this increasing popularity has shined a light on osha’s one significant problem—virtually all commercial osha is wildharvested because this independent herb doesn’t do well as a cultivated crop. This limitation combined with the ever-increasing demand for osha has many herbalists concerned about the viability and long-term sustainability of this precious botanical. Let’s take a deeper dive into osha.

Not many people take me for an essential oil guy, and I must admit I was a little hesitant at first to start exploring aromatherapy. However, my decades-long time at Mountain Rose Herbs means I’ve had the opportunity to try hundreds of pure essential oils and I began to develop a true fondness for them in spite of myself. Partly this is because I really value ambiance and the art of creating experiences. I’ve learned over the years that aroma plays a key role in creating the mood of a space.

We offer one of the most thorough selections of certified organic herbs, spices, and botanical products and are commited to responsible sourcing. 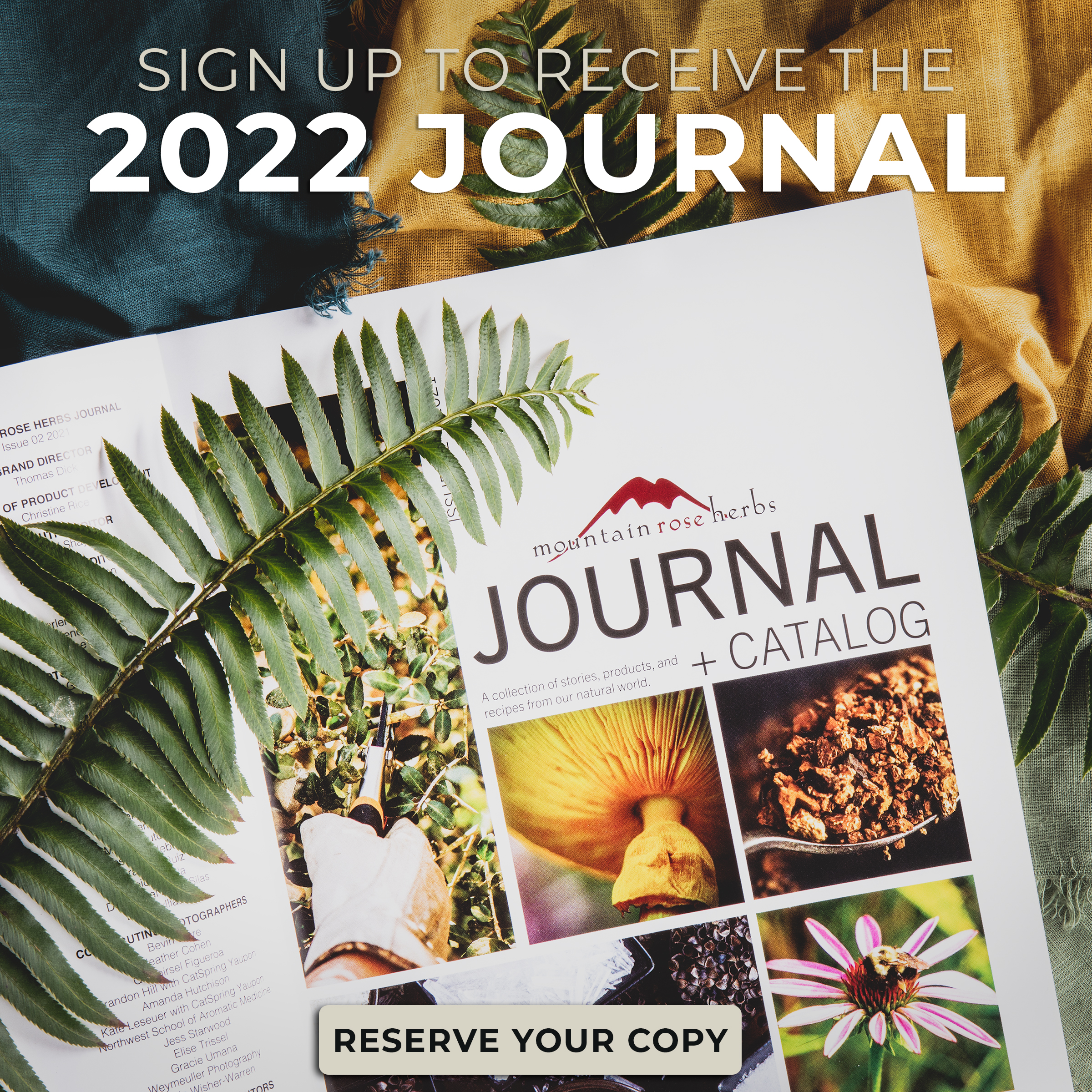 Enjoy Some of Our Most Popular Blogs

Looking to learn, grow, and connect in 2022? Check out our list of local and national herbalism events that we'll be attending or sponsoring. We can't wait to see you this year!

Learn how to add more herbs to your diet with these easy-to-make herbal salt recipes.

When you're having trouble focusing, this easy essential oil blend paired with gentle movement can be just the trick to get your mind back on track.

Try this herbal remedy made with passionflower, lavender, and valerian when you have circular thoughts and you need a way to rebalance your mind and body.

Explore 10 underused herbs that are little-known but wonderful substitutes for more popular herbal allies. These uncommon herbs are sure to spark your herbal curiosity.

A Beginner's Guide to Herbalism

Interested in herbalism, but don't know where to begin? Build your herbalism starter kit with this guide to beginner-friendly herbs, supplies, and more.

Learn how to properly season your cast iron skillet, how to choose the best oil to season cast iron, and how to make a DIY cast iron conditioner.

Explore the benefits of stinging nettle in this herbal deep dive. Learn all there is to know about nettle leaf and nettle root with links to safe harvesting practices and recipes such as nettle tea.

Learn more about osha and how you can help take pressure off this important, at-risk herbal ally.

Try this uplifting and earthy diffuser blend to recreate the clean and crisp atmosphere of a cabin found deep the woods.